It's been months in the making, but Baby B's room is finally just about ready for his arrival! Good thing too, since he's due in a week!
I wanted to make this a special space for our new addition, while also being frugal, which meant scouting for deals and repurposing a few things we had around the house. When we decided on a coffee-coloured crib, we snagged this shelf from our living room for the nursery instead. 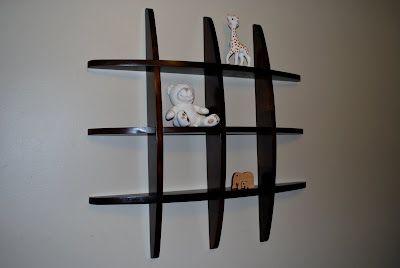 I picked up this super-cute, hand-carved mommy & baby elephant figurine at the Boyce Market in Fredericton. 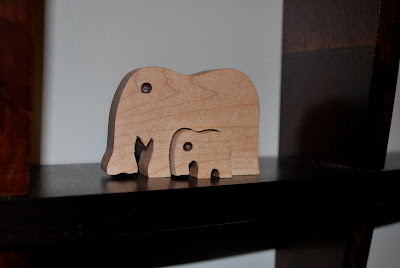 Husband and I loved the baby safari theme in the Babies R Us catalogue right away and couldn't find anything we liked more. That said, to be truthful, the wall decals and valence we got were quite over-priced, and the customer service at the local store is absolutely terrible. In the end though, we got what we wanted and are very happy with the way it turned out.
The baby sign above the window is one of the first gifts our baby received, from his grammie-to-be. The swing, which will likely end up in the living room after our babe arrives, was a generous gift from my co-workers. 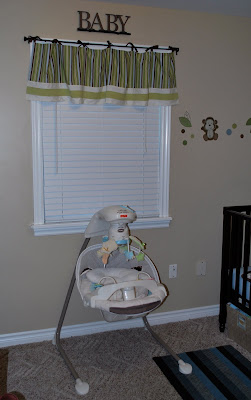 Here are the decals up close. They stuck on easily and we were able to move them around until we were satisfied with the pattern. They blended perfectly with the wall colour, which meant we didn't even consider painting the nursery — one task I was happy to forego. I used some little 3x3 canvases I had stashed away to paint a nameplate for our boy, and Husband carefully hung them at just the right angle above the crib. 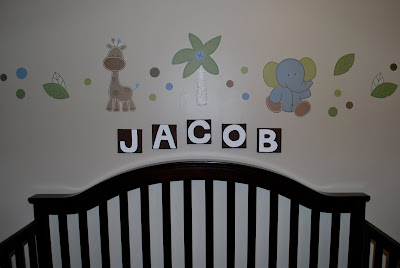 You'll remember these under-crib storage bins from an earlier post. 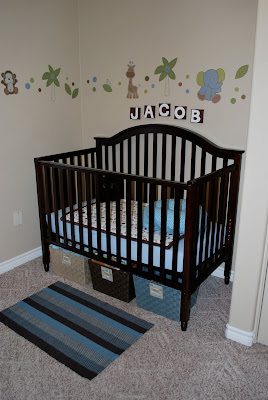 Captured in two photos below is the shelf we picked up at Walmart, thanks to generous gifts of money and gift cards. We were originally planning to get a changing table, but it seemed silly to spend money on a piece of furniture that could really only serve one (stinky) purpose. So we picked this shelf for it's storage and display potential, as well as future usability in any room of the house. 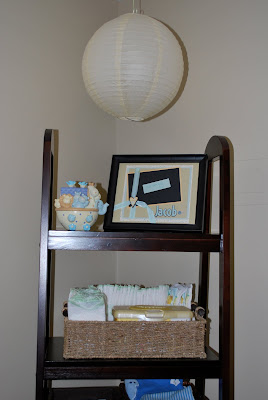 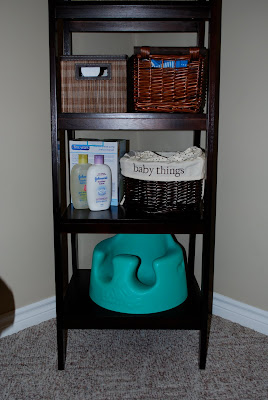 The lantern hanging above the shelf is a keepsake decoration I kept from our wedding. The first shelf holds the lovely DIY frame we received from a friend and the Noah's Ark themed piggy bank Baby B received from his great-grammie-B. We're using the next three shelves for storing diapers, receiving blankets and other items in baskets. And the bottom shelf currently houses his Bumbo chair until he's big enough to use it.
Finally, we have the dresser that once belonged to my Mum and then belonged to me. I had originally considered re-finishing it, but decided that the shade of the wood lends itself nicely with the espresso colour of the rest of the pieces. My main concern was the surface of the top of the dresser, because the stain and varnish was quite faded, but that issue was solved by attaching the changing pad we received from lovely friend HH and converting it into Baby B's changing station. 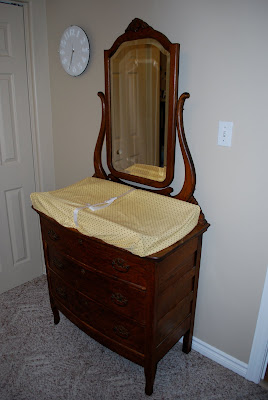 We snagged the white clock, which was a wedding gift, from one of our bathrooms and decided it would serve better use here when we stagger in for middle-of-the-night diaper changes and have no idea what ungodly hour it is.
One thing you can't see here is the swivel chair. It's currently still in its dusty rose/beige state, and I'm hoping to have time to alter the chocolate brown slipcover I bought for it before Baby B debuts. Stay tuned for that, too.
Now all this room's missing is its tiny resident, who is hopefully coming soon!
xo lindsey at 9:28 AM